The Ultimate Guide to Positive Discipline 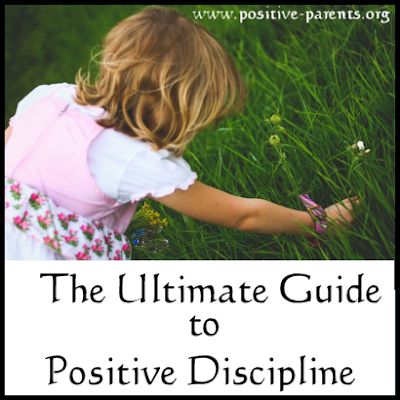 Scenario #1 – Danger:
Your 2-1/2 year old son doesn’t like to hold hands when walking through parking lots or in large crowds. Every time you try to hold his hand, he pulls it away and tries to run, or he fusses at you and claims “I can do it myself!”

Behind the behavior: Independence
It’s a toddler’s job to start developing his autonomy and that means doing things on his own. Because he’s just starting to develop empathy (being able to see things from another’s point of view) he doesn’t realize that the drivers may not see him or be able to stop in time. He just knows that he wants to walk the way he wants to walk and that running is fun, too.

Safety is non-negotiable. I wouldn’t say to him, “Well OK, but please stay close” and risk him darting in front of a car or losing him in a crowd. Remember, positive parenting is not permissive parenting. While it’s important to foster independence and competency, it’s more important to keep him safe.

ACTION:
1. Before getting out of the car, explain to your toddler what is going to happen.

2. If you can offer him a choice, do so. “Would you like to ride in the stroller or hold my hand?” If the stroller/cart is not an option, explain in simple terms that you must keep him safe, and to do that, he needs to hold your hand.

3. As you take his hand, try to engage him in something that takes his mind off the hand-holding. “Let’s look for red cars” or “let’s skip to the door.”

4. If he cries or protests, empathize with his upset. Get down on his level. “I know you want to walk by yourself, but my job is to keep you safe. I don’t want you to get lost! Now let’s look for red cars! There’s one! Do you see another?”

5. If he still struggles to free himself, carry him. You may have to endure a few unpleasant ventures.

6. Acknowledge his need and empathize with his upset, but stick to your limit. He’ll soon learn it’s a non-negotiable.

Scenario #2 – Aggression:
Your 19-month-old is a biter. He has just bitten another child at a play date.

Behind the behavior:
It depends on what was happening at the play date. It could be frustration, anger, hurt feelings, or fear. Toddlers, even very verbal ones, can’t always articulate what they’re feeling or thinking. When something triggers a primal emotion, they will have access to even fewer words. Because the mouth is central to learning at this age, biting is a common expression of discomfort.

ACTION:
1. Remove your child to safety, make sure the child bitten is OK, and then set or reinforce your limit. “I won’t let you bite.”

2. Validate his feelings; empathize with his upset. “You got mad because he took your truck. I see you’re mad, but it’s not OK to bite. Biting hurts.”

3. Let your child express his emotion safely, and problem-solve later.

The reason I suggest not talking about appropriate alternatives during the time it happens is because children do not take information in well when they are in “fight or flight” mode or are upset. They are much more likely to learn and retain information when they are calm.

4. Build his empathy muscles by asking him to look at the child he bit and name what that child is feeling. “Look at his face. He looks really upset. How can you make this better?”

5. Encourage him to repair the relationship either with a verbal apology (his choice, not forced) or a hug or drawing. Let him decide how to make the repair as you encourage him to empathize with the other child.

6. If you feel a consequence is necessary, you could choose to leave the play date or tell him if it happens again, he will have to go home.

Key Note: Don’t bite him to show him how it feels.
You’d be surprised at how many parents would advise you to do this. Remember, you are the model for appropriate behavior!

Scenario #3 – Sibling Rivalry:
Sally (5) is playing with her teddy bear. Her sister, Emma (3), grabs the teddy bear from Sally. Sally tries to grab it back and they end up in a tug of war, both yelling at each other to “stop it!”

Behind the behavior: Competition
Both children want the same thing, but they don’t know how to negotiate. Many toys become desirable just because someone else has it. Some kids also use snatching as a way to initiate play.

ACTION:
1. State what you see happening. “You both want to play with the teddy bear. How can we solve this?”

2. Wait for their suggestions at this point, if they come. If not, throw some out there. “One of you could pick a different toy to play with, or you can take turns with the teddy bear. Which sounds best to you?” Realize this is not likely to go smoothly at first, but you’re teaching a valuable lesson here.

3. Validate each child’s feelings. If Sally says, “Mom! I was playing with it and she stole it!” then you might say, “I understand that you’re frustrated she took your toy. I will talk to her about snatching.” Emma chimes in “Not yours! It’s mine!” so you say, “You think it’s your bear and didn’t want Sally to have it.”

4. Once you help them reach a solution, show them how to carry it through. If they decided to take turns with it, they may need your help if they don’t understand the concept that well yet.

5. Later, when Emma is calm, talk to her about the importance of being respectful to her sister, and how snatching is not respectful but instead she should use her words to ask for the teddy bear, then practice doing that with her.

6. If a peaceful agreement cannot be reached between the children, you will need to choose for them and ensure it’s carried out.

In addition to these scenarios, I’ve gathered great posts from positive parenting experts and educators to include in this ultimate resource.

These are worth saving, pinning, or otherwise bookmarking for easy reference along your parenting journey.

Positive Discipline 101 by A Fine Parent

From Control to Connection by Alison Smith

Tips for Parents to Connect Versus Correct by Chelsea Lee Smith

Are You a Conscious Parent? By Alison Smith

And, if you’re having trouble explaining your discipline philosophy to your child’s caregivers, this handy hand-out from Drs. Tina Payne-Bryson and Daniel Siegel, authors of No-Drama Discipline, explains it clearly.