Why We Yell and How to Stop!

HomedisciplineWhy We Yell and How to Stop!
10 February 2015 Rebecca 0 Comments 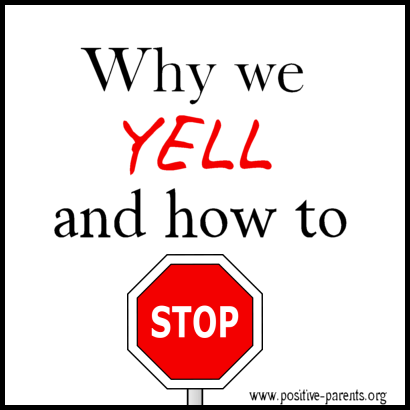 You promise that you’re not going to yell today. You really do try hard, but in a flash you lose control and yell at your kid. Then you feel terrible guilt and resolve, yet again, to do better.

Does this sound familiar? You’re not alone.

Why Do We Yell?
Yelling is a function of the limbic system, the emotional centers of your brain. Here’s how it works: Information is always coming at us. It goes through the amygdala first, and the amygdala decides where to send it, either to the cortex (your thinking brain) or the limbic system. If the incoming information triggers an emotional charge (like the kids fighting), it gets sent to the limbic system, the more primitive emotions center. Now you’re reacting without giving much thought to the consequences (because logic and reasoning take place in the cortex, and you’re not operating from there!), so then a flood of hormones is released that causes you to be alarmed. You get a surge of energy, and you release it by yelling.

Why the Guilt?
Once you’re brain and body calm down, your cortex reengages, and you can now reason again. This causes you to feel terrible about yelling at your child because you see it wasn’t a reasonable action to take. The Guilt Train makes a full stop at your door and invites you in. It’s not a bad ride to take as long as you don’t stay on too long. Guilt can be a good motivator for change if we choose to acknowledge it and create a plan for change.

How to Disarm Emotional Triggers
Most often, triggers are formed in us in our early years. For example, if whining triggers a strong emotional reaction, it is likely that you were shamed or scolded for whining when you were a child. It is helpful to identify your triggers by making a journal. Write down what triggers you and try to find out why it is a trigger. Usually, our triggers come with negative thought patterns. “My kid is such a crybaby! He cries over everything!” These negative thought patterns fuel frustration and build negative feelings. To disarm the trigger, get to know it. Understand it first, and then take the emotional charge out by reframing the thoughts that accompany the trigger. For example, instead of “My kid is such a crybaby,” try “My kid is having a hard time and needs my help.” If you are consistent with this, then, over time, the trigger will become deactivated.