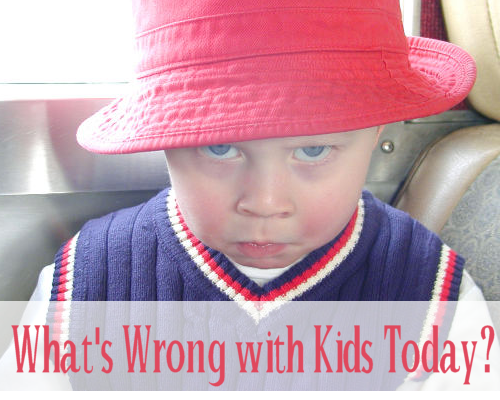 “Before you go and criticize the younger generation, just remember who raised them.” – Unknown

We’ve all heard the complaints. Today’s children are more disrespectful, undisciplined, and have a greater sense of entitlement than ever before. But do they? Alfie Kohn talks about this in his article Spoiled Rotten: A Timeless Complaint. He notes that “Parents today, we’re informed,either can’t or won’t set limits for their children. Instead of disciplining them, they coddle and dote and bend over backward to shield them from frustration and protect their self-esteem. The result is that we’re raising a generation of undisciplined narcissists who expect everything to go their way, and it won’t be pretty — for them or for our society — when their sense of entitlement finally crashes into the unforgiving real world.”

“The revelation that people were saying almost exactly the same things a century ago ought to make us stop talking in mid-sentence and sit down – hard. In fact, the more carefully we look at the cranky-wistful conventional wisdom about how children are raised, the less there is to be said in its favor.” – Alfie Kohn

I’ve heard it over and over again. Kids need more discipline! Parents today are too soft! Well, depending on where you look for statistics, anywhere between 65% to 90% of American parents are spanking their kids. Here are some statistics I found:

– 68 percent of American parents think spanking is not only good but essential to child rearing;

– 90 percent of parents spank their toddlers at least three times a week; two-thirds spank them once a day;

But I have another theory.

I believe the problem is not a lack of discipline, but a lack of connection. For decades upon decades, we have raised children with fear (Do you want a spanking?), punishment (You’re grounded for a week!), shame (You’re such a naughty little girl), and coercion (If you don’t pick up your toys, I’m throwing them in a trash bag!). We’ve become so wrapped up in “raising them right” that we’ve forgotten how to love them right. We’ve bought into the so-called experts advice of not spoiling them with too much attention, letting them cry it out, and not sparing the rod, and we’ve pushed aside our own instincts. Thus, parents have drawn a line between themselves and their children that dare not be crossed. “I’m your parent, not your friend!” This has been so ingrained throughout the generations that many don’t even question it. (I’m questioning it, are you?) Naturally, we love our children. We give them hugs and praise, conditionally. We buy them the latest gadgets. But are we connected?

For too long, children have been seen and not heard.

It’s time to hear them.

For too long, we’ve raised our children using fear tactics.

It’s time to use love tactics.

A century’s worth of complaints is more than enough evidence that we’re doing something wrong. Depression and mental health issues are a major problem because adults have to put so much into healing their childhood wounds, and some never do heal.

“There is no single effort more radical in its potential for saving the world than a transformation in the way we raise our children.” – Marianne Williamson

If we do this, I guarantee our story will be different a generation from now. Imagine where we could be in a century…