What’s the Deal with Consequences? 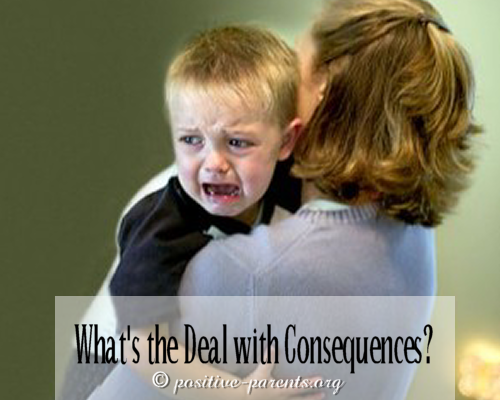 Whether you’re new to positive parenting or a seasoned veteran, the issue of consequences can get your head spinning. Logical versus natural versus imposed. Then there are positive and negative consequences. What is the difference between them all?

I’m going to attempt to simplify this whole consequence dilemma by giving you one secret tool.

Throw the word “consequence” entirely out of your vocabulary and replace it with the term “problem-solving.”

Do you see how this changes the whole concept in your mind? Now it’s not about coming up with something to do to your child, but it’s about working with your child to find a solution. Having your child involved in the problem-solving process will not only teach him valuable lessons and instill self-discipline, but it will leave his dignity intact, and he’ll feel good about himself and his relationship with you.

Because I like to give actual examples instead of leaving you guessing, I’ll start with a little personal story. My oldest son was barely 4 years old at the time we went to the bank where I used to work for a visit with some friends. Sitting in my friend’s office, he began spraying the compressed air duster on everything. I asked him to please put it down, which he did briefly, but he couldn’t resist for long (that stuff is pretty fun to spray) and he ended up emptying out the whole can.

Now, you might be wondering why I didn’t just get up and take it from him, and the answer is because I saw an opportunity here to teach him a valuable lesson. When we got back to the car, I kindly explained to him that we had to respect the property of others. I did not lecture, I was just matter-of-fact about it. I said “We really need to get a new can for the bank to replace what you used. How are we going to fix this? He thought for a moment and said “I could do chores to earn the money!” I told him that was a great idea and that I was proud of him for thinking of a solution. When we got home, I let him wipe off the kitchen table and the sink, and I gave him $1. The next day, we stopped by the bank, and he took the money to my friend and told her he’d earned the money himself to give back to her to buy more air duster.

*Edited to add: Keep in mind this was just one day, one instance, one lesson. We teach many, many  lessons throughout everyday interactions. He knows it’s not OK to waste things and act selfishly because I’ve taught him that in many other interactions with him. In this particular scenario, the lesson I wanted to teach was that of responsibility and righting wrongs. I made the call to do so because wasting an air duster can is a fairly harmless act and the consequence (earning the money to pay for it) was small. Also, this was a good friend of mine and she was in on the lesson. I explained to her that he’d be earning it back and would bring the money back to her to pay for it, and when he did so, she encouraged his responsibility. Had I not known this person, had it been a slightly different scenario, I would have held my limit and put it out of his reach. However, parenting is a series of  choices, and in this instance I decided to let him experience the consequence of his choice to not listen to me.*

Why was that not a punishment? Because I didn’t make him feel bad about himself, he came up with the solution, he willingly did the chores, and he felt proud of himself when he took the money back to her.

If I would have said “Shame on you! You did exactly what I asked you not to do! Now you’re going to do chores and give her back the money!” he would have felt ashamed, angry, and resentful. That would have been punishment. Make sense?

Let me give you just a couple more examples of problem-solving instead of imposing consequences.

Note: Because problem-solving is a cortex (pre-frontal) function, the child probably won’t be ready to be involved in the problem-solving process until at least age 4. However, you can certainly let your younger-than-4 children hear you problem-solve. Talk it through with them. “You wanted Emma’s doll, so you took it from her, but now Emma is crying. You both want the doll. Hmm. How can we solve this problem? How about you and Emma take turns with the doll?”

Scenario
Your 5 year old son gets upset at Grandma’s house and yells “I don’t like you!” to her. Grandma tells you about when you pick him up. Instead of telling him he was rude and taking away his tv for 2 days, involve him in making it all better.

Ask him what happened at Grandma’s. Hear him out. You might say “I understand you got upset. Everyone gets upset sometimes, but we have to be careful with words because they can hurt. Do you think those words hurt Grandma’s feelings?” Ask him “How can we make Grandma feel better? Can you think of something?” He may decide to pick her some flowers or make her a card or write her an apology note. If he doesn’t come up with anything on his own, offer him a few suggestions like I just listed and let him choose. When he chooses, help him carry out his solution by taking him outside to pick the flowers or giving him supplies to make a card and tell him how much better he will make Grandma feel. Let him surprise her with it! He’ll probably be smiling ear-to-ear.

Scenario
Your 13-year-old has math homework due the next day, but she wants to go to a movie with her friend. You remind her of the homework, and she says “I hate homework! I want to go to the movie!” Resist the urge to make her sit down and do it “this instant!” and give her the opportunity to problem-solve. You might say “Well, I’d rather watch a movie than do homework too, but I wonder what your teacher will say if you don’t have your homework?” Lend an empathetic ear to what she has to say. If she doesn’t begin to come up with a solution, you can coach her. “What time does the movie start? I’ll bet you can get the homework done in time and still make the movie and have your homework ready for your teacher tomorrow.”

Obviously every scenario can go a hundred different ways, but the idea is to involve your child in the process. Let your child come up with as much of the solution with as little prompting from you as possible, but do offer coaching if he’s young or having a difficult time problem-solving himself. There should be no shaming, blaming, or anger in the problem-solving process. If you’re child is upset, or if you are upset, wait until everyone is calm to begin the process. The keys to successful problem-solving are:

1. Your child feels GOOD about it afterward.

2. YOU feel good about it afterward.

3. The problem has been solved.

I hope this helps you solve the problem of figuring out consequences!