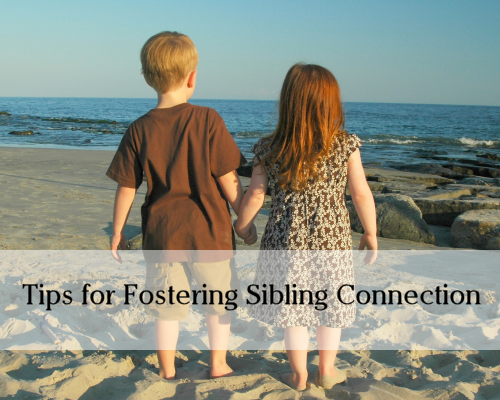 My firstborn was barely 2 when his baby brother was born. He was in awe those first few days, but his admiration quickly wore off. Once he realized this new person was sticking around, taking up a lot of mommy’s time, he became rather upset. He ignored his brother’s very existence for the following 8 or so months.

Now, they really are the best of friends. Over the years, I have found some things to be helpful in fostering their connection, and others to be detrimental to it.

Here are some mistakes I have made that fostered rivalry rather than connection:

Comparison
Though I have tried to make a point not to compare my children to each other, during a time of frustrating potty training, I did utter the words “Your brother was potty trained by 2! Why are you making this so difficult?”

As you can guess, this was not helpful in either getting him potty trained or in cultivating fuzzy feelings for his brother. All it proved to do was make him feel “less than.” Comparisons are relationship killers and self-esteem blows.

Behavior Charts
In the very early stages of my transition to positive parenting, when I was still aiming for a nicer way to control them, I used a behavior chart. Each one had his own chart, and what I did was this: There were 3 pegs on each chart, and from them hung squares that had smiley faces on one side and sad faces on the other. When one misbehaved, I turned over one sad face. Three sad faces resulted in a consequence, usually a time out. It seemed like a good idea at the time. In fact, this very chart would probably be a viral hit on Pinterest, but it was a disaster in our house on several levels. For the sake of consistency, I’ll only discuss what it did to the sibling relationship.

Yes, you can see how this induced rivalry and competition. Not good for their relationship, even worse for their behavior. This chart was an epic fail.

Separate Chore Charts
More recently, both of my boys had separate responsibility charts. Several chores or responsibilities were listed on each chart and they checked off a box when they completed the job. Again, this didn’t make either child more responsible, but it did create more competition.

Now here are some things that have made a positive difference in their relationship:

Acknowledge the Bond
When I stopped getting in the way by creating rivalry, their relationship naturally improved. I made a point to notice and point out when they were kind to each other or playing well together. There is something to be said for speaking out what you want to have happen in your life. I’ve read that in many articles about positivity, and it turns out that it works amazingly well. What you focus on, you get more of. When I focused on their rivalry, I got more of it. When I focused on their connection, things improved greatly.

Don’t Tolerate Disrespect Between Siblings
I will not allow name calling, physical aggression, or other such bullying or disrespect between them. If they argue, and they do, I give them a chance to work it out peacefully themselves (because by now we’ve run through problem-solving MANY times and they know how to do it) and most times they say “we can solve this, mom.” However, if emotions are charged and peace isn’t being reached, I step in and mediate or separate them.

How do I enforce my “no disrespect” limit without punishment? I knew you were going to ask. 😉
Punishments are, simply put, something imposed on a child to make him “pay” for his wrongdoing that are generally not related to the ‘offense.’ Since teaching and connection are my priorities, it’s quite easy to avoid punishments in favor of teaching. However, teaching sometimes means they don’t like the consequence of their choice or are momentarily upset with my decision when I have to step in. Not punishing doesn’t mean it’s a free for all around here. I expect them to follow family rules.

If my son is physically aggressive (hits, pushes, scratches, etc) then I take him to time in. By this point, we’ve problem-solved and discussed alternatives so much it’s not really necessary to keep doing that. He gets it. He knows what he’s supposed to do and what he could have done better, but he’s 4 and he doesn’t always have control. I’m aware of his immature executive function. In the time in, he sits with me and I ask him how he’s going to repair the rift. He always chooses make a drawing of them holding hands. He does so and takes it to his brother. They smile and hug, the rift repaired.

We don’t have issues with name calling or teasing, but I would treat that like I treat aggression. Time in, problem-solve, repair.

Create a Team Atmosphere
We’re a team, and we tackle things as a team. The individual chore charts have been replaced by a team chart. They tackle jobs together, and then get a check mark for completing it together. I also create a team atmosphere through such things as family meetings where we all get equal chance to weigh in on things like vacations, weekend plans, issues, etc. We frequently talk about the importance of family. Our weekends consist of the four of us spending quality time together, laughing, playing, and having fun. Family traditions, weekend routines, and routine special occasions all foster the team/family atmosphere and loving bond between us all.

Individual Attention
When each individual child feels wholly loved and connected to his parents and an important member of the family unit, he is much less likely to bicker and fight for attention. Give each child individual time, fill his cup, take interest in what he’s interested in, and maintain a strong connection with each one individually.

Sometimes being a brother is even better than being a superhero. – Marc Brown

A sister is a gift to the heart, a friend to the spirit, a golden thread to the meaning of life. – Isadora James