The Brain Science That Changes Parenting 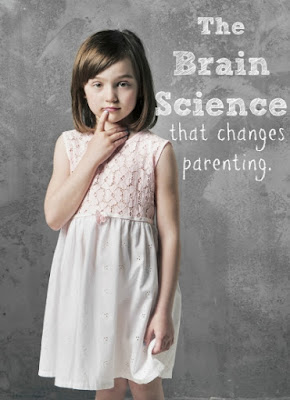 I have been fascinated by neuroscience for several years now. In fact, learning about basic brain function and child development is why I chose to leave conventional parenting methods behind. I’m certainly no neuroscientist, and I still don’t understand the deep complexities of the brain, but I’ve come to understand the basics through No-Drama Discipline by Drs. Daniel Siegel and Tina Payne-Bryson.

Dr. Siegel is a clinical professor of psychiatry at the UCLA School of Medicine. Dr. Bryson is a psychotherapist and the Executive Director for the Center for Connection. What they share in their book is huge, paradigm-shifting information that every parent needs to know. I’m going to share with you just a snippet that I feel is extremely important. Of course, I recommend adding their book to your library.

Let’s divide the brain into parts. The lower region of the brain is what Drs. Siegel and Bryson refer to as the “downstairs brain.” This is made up of the brainstem and the limbic region. The brainstem is our primitive “reptilian” brain and is responsible for operations such as breathing, digestion, and regulating sleep cycles. The limbic system houses our strong emotions. The downstairs brain is well developed at birth, so your child feels all of the strong emotions from the get-go, but managing those emotions is not a function of the lower brain.

The upper region, or upstairs brain as the authors call it, is made up of the cerebral cortex, the outermost layer of the brain. The upstairs brain is responsible for logical thinking, reasoning, making decisions, planning, regulation of emotions, empathy, morality, and much more, and this is very underdeveloped at birth. In fact, it won’t be fully formed until the mid 20’s.

Why does this change everything?

It takes the information we’ve been fed for years, such as the idea that a child who hits is just being mean and needs punished or that a toddler having a meltdown is being manipulative and needs ignored, and blows it completely out of the water. None of that is true! A child having a downstairs tantrum (true emotional overwhelm) cannot just stop the tantrum no matter how much you threaten or bribe her to, because she’s locked in her primitive downstairs brain and cannot access the part that houses reason. A child who hits someone has lost access to his very underdeveloped upstairs brain and is reacting from his primitive brain. He’s not mean – he’s simply not capable of controlling his emotions and behavior all the time.

Does this excuse bad behavior? Do we just let it go since they can’t help it? ..Finish reading this article over at Creative Child