Charts can be a very useful positive parenting tool if they are used correctly. I have used many charts through the years, some yielded good results and some bad results because they were used incorrectly. I’ll share with you what has worked, and what has not.

First off, charts do not have to be tied to any kind of reward or consequence. Often, these charts are just visual reminders for my kids (whose names and faces have been blurred out for privacy), but I will occasionally attach a reward, especially when I’m trying to get them in a new habit, i.e., potty learning or straightening out bedtime problems.

Here are a couple of charts that went right.

This first one was a routine chart I used to help get both my boys settled into a daily routine. I have to admit I was never much on routines, but after reading some articles on the benefits of them, like this one, I decided to give it a go. With each task or period completed, they got to put their little smiley face Velcro sticky onto the chart.

The Benefits: This chart was a good visual for the kids on what they needed to do and what was coming next. It brought some consistency and calmed some of the chaos. They enjoyed the smiley faces and liked putting them on, feeling a sense of accomplishment and pride.

The Downfalls: You have to be consistent with it. Who’s not Mrs. Consistent? Me, unfortunately.  I soon slipped back into my willy-nilly ways. 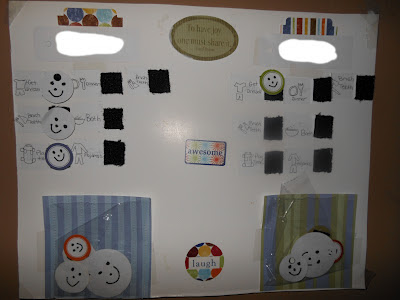 This responsibility chart was also a winner. This one was for my then 4 year old. The visual reminder was a plus for him, and he enjoyed putting his finished chore in the slip. (The role model one was added to cut down on sibling rivalry. It did help.)

The Benefits: The chart reminded him of what his responsibilities were so I didn’t have to keep asking.  It was placed in the playroom where he could see it all day. My younger had one as well, with different responsibilities, and both enjoyed these charts. 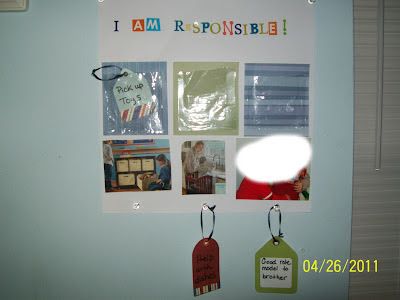 Another winner was this potty chart I did back in 2009 for my 2 year old who was potty learning. I know this one is kind of amusing.  As I said, I do occasionally attach rewards to things, and this was one of those times. There was a giant toy Hummer at Toys R Us he wanted, and I told him I’d get it for him if he used the potty. This was pre-PPTB, so I hadn’t read ANY parenting articles about rewards/punishments and how I should/shouldn’t do things. I just did what I felt was right, and that is often the right thing to do! This worked like a charm. He was so easy to potty train! It took ONE day, and he never looked back. And guess what? He didn’t even ask for the toy. He just enjoyed getting the stars. And of course he didn’t continue to ask for stars each time he went to the potty once it had become a habit.

The Benefits: Earning a star toward his goal was encouraging and exciting for him. He could see just how far he’d come and how well he was doing. It gave him a sense of pride and accomplishment. 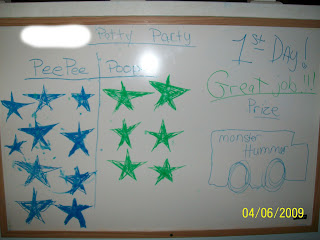 This bedtime chart has been a recent lifesaver! It was part of my “bedtime boot camp” because we were having major bedtime issues around here. The kids got a kick out of the term “boot camp” which is why I call it that. It’s not much like boot camp at all. 🙂  This was another time I added a reward because I needed to entice them to stick with the routine, so for each happy face they get (we’ll get to that in a minute), they earn a quarter on their allowance. They get an extra buck 75 and I get a week of peace. Win/Win.
The Benefits: Expectations were clear and both could easily follow the steps.  This is on the back of their bedroom door where they can easily see it as we go through our routine.
The Downfalls: None. 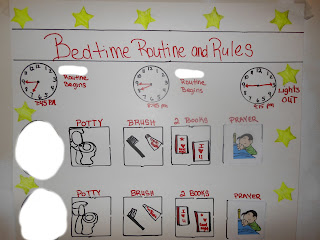 Charts gone wrong.
I have a tried a couple that went totally wrong. This first one is actually attached to the bedtime chart above, and is currently in use, although I’ve modified it now since seeing what the problem was (which I would have known if I had looked back on prior charts gone wrong).
The idea was they got a smiley face for each night they followed the bedtime routine and rules and a sad face when they did not. Here’s the problem with this chart. The sad faces were discouraging and of absolutely no help to my 3 year old. This also caused some sibling rivalry as he wanted to give his brother some sad faces, too. This obviously made him feel “less than” his brother. So, I don’t do the sad faces anymore. They will get a happy face for following the rules (encouragement) and it will just be left blank if they don’t, although we haven’t had any problems since day 2 of this chart.
The Benefits: The smiley faces indicate success and an extra quarter, so they do find those encouraging. They always smile ear to ear when I put the smiley face up.
The Downfalls: The sad faces are discouraging and caused sibling jealousy and feelings of inadequacy. Big no-nos! 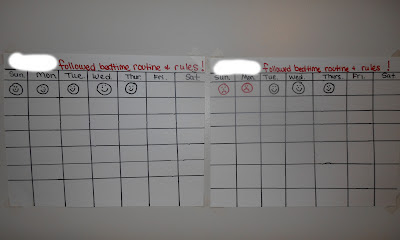 Here’s another one that went wrong. This idea came from Elizabeth Pantley’s book, The No-Cry Discipline Solution. Here’s how it worked. I wrote down what we were having issues with at the time. We started the day with 3 happy faces (sad faces were drawn on the flip side). If one these rules were broken, the happy face got flipped over to the sad face side and put on the other side of the chart. If they got 3 sad faces, they went to time in.
The Benefits: None, except maybe calling attention to the expectations.
The Downfalls: There are so many things wrong with this chart. First, all the “no” statements were discouraging. The sad faces were discouraging. The behaviors were NOT at all improved by this, and it caused sibling rivalry if one got a sad face and other didn’t.  This chart lasted 2 or 3 days and went in the garbage. 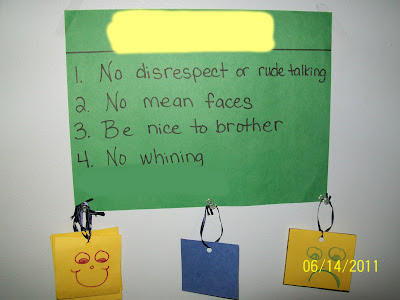 What have I learned? To always ask myself this question before I make a new chart. 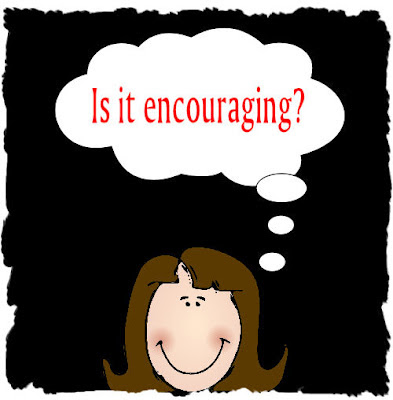