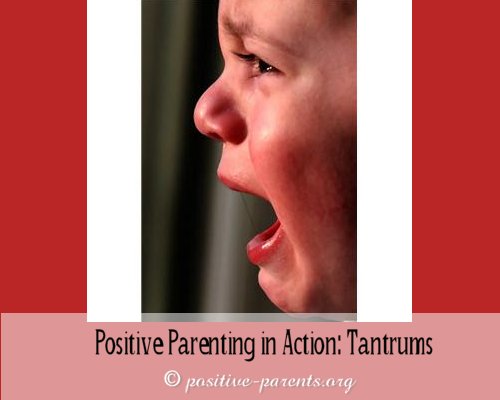 This is the second post in my Positive Parenting in Action series. The first post was about exploration and danger.

In this series, I will present several scenarios that could occur, look at the possible reasons behind the behavior (this is important!), and then give an example of how the parent can handle the scenario positively.

If you’ve had a toddler, chances are you’ve experienced a tantrum. I’ve been blessed in that neither of my children have ever been big on tantrums, but we’ve seen a few. In fact, just 2 nights ago, my 2-year-old threw himself on the floor of the grocery store and stiffened up so that he was hard to lift up. I love the looks people gave me. The teenagers smirked and giggled. The younger moms nodded. The elderly smiled. One mom stopped to tell me, “Enjoy it, even now, honey. It’s harder when they’re bigger.” It’s bound to happen to you sooner or later, so how do you handle these fun little scenarios the Positive Parenting way?

Scenario #1
Your 18-month-old is happily stacking blocks. Suddenly, the blocks fall over, and he begins to wail and flail. What? He was happy 4 seconds ago.

Behind the behavior: Frustration. Most likely, a lot of little frustrations throughout the day have been building, and the blocks falling was the last straw. Look for what could be causing unnecessary frustration throughout the day. Does he hear “no” 500 times? Is he still mostly non-verbal? Imagine how annoying it must be to not be able to communicate what you’re needing or feeling. Is he getting enough rest? Lots of things can cause frustration to build. Look for the causes and address them.

:ACTION: All he needs from you at this point is understanding. He’s got big emotions, and he needs to release them. Depending on your child, hold him, rock him, or just stay near. You might say “You’re so frustrated! It’s okay. I’m right here.” Wait with him until it passes. If it’s a minor upset, you may be able to improve his mood with humor, but if it’s major, he needs to get it out. Just love him through it. It will pass, and not only this tantrum, but this entire stage, and pass quickly.

Scenario #2
Your 3-year-old wants ice cream for dinner. (Sounds yummy to me, too!) You, however, have dinner on the stove, and you know ice cream doesn’t exactly cover the 4 food groups. *You might be able to side-step the tantrum with a “Yes! You can have ice cream after dinner” instead of just “No” but, then again, maybe not.* Realizing she is not getting ice cream right now, she has a meltdown of her own.

Behind the behavior: This is getting trickier 🙂 At 3, she may want a little more control, and deciding what she wants for dinner seems perfectly reasonable to her. If she has been grappling for independence recently, you can give her control over all the areas you don’t need control over. Let her decide her snacks. Let her pick out which plate. Let her match (or mismatch) her own outfits. This will help fill her need for autonomy, and she’ll be more likely to cooperate when you need the control.

Or, this could just be another case of frustration. Being 3 isn’t always a walk in the park. Look for ways to ease her frustration levels through the day. Do you have too many unnecessary limits? Is she constantly spatting with a sibling? Is there tension in the home? Address the reason behind the frustration, and she won’t be melting down so much.

:ACTION: Empathy will always be your first step in addressing tantrums. She doesn’t need the ice cream, but she does need to know that you “get her.” If you send her away for tantruming, it will just build more bad feelings on top of what she already has. It’s okay to be upset that you can’t get what you want. Be present for her. You might say, “Wow, you’re upset. You really want ice cream right now!” Truly empathizing with her upset is likely to reduce tantrum time, but remain present and calm (just breathe!) until she lets it all out. Explaining why she can’t have the ice cream mid-tantrum is futile. She’s in flight or fight mode (throwing in some brain science here) and it’s best to save the lesson for when she’s regulated (calm). Later, you can explain why ice cream isn’t a good dinner choice, but during the tantrum, she just needs your presence and empathy.

*Note* If she has aggressive tantrums (i.e. kicks or hits) or tells you to go away, keep at a safe distance, but don’t leave. Let her know you accept her, big emotions and all.

Scenario #3
You’ve taken your 2-year-old with you shopping. You’ve been out for a few hours now, and the crankiness has been increasing over the past hour. She grabs her sippy, but it’s empty, so she hurls it to the floor and begins to cry. Hard. You’re already noticing “the looks” from the other shoppers.

Behind the behavior: Hunger? Tiredness? Over-stimulation? Boredom? Could it have been prevented? Fill the need, whether it be food or a nap or a break, once the tantrum has passed, and chalk it up to a learning experience for the next trip.

:ACTION: What’s the word of the day? EMPATHY! Who cares if everyone is staring and judging? Focus on your baby and maybe they’ll learn something. “I know you’re so tired! I’m sorry, sweetie. I’ve kept us out too long today, and you’ve missed your nap. It’ll be okay.” By now, I bet you’ve got this down pat. Stay with her through the tantrum, empathize with her upset, remain calm.

Scenario #4
Your 7-year-old asks you for a new scooter like his friend has. You tell him you can’t afford it right now. He yells back at you that he never gets anything he wants, his friend’s parents buy him everything, and then he goes into full-on fit mode, stomping, slamming doors, throwing things.

Behind the behavior: At 7, he should probably be past the tantrums, so you might need to do a little detective work. Perhaps there is peer pressure of some kind, or maybe even bullying that you’re not aware of. His desire to fit in may be why he wants the scooter, and may be driving the tantrums. Or perhaps he just hasn’t learned how handle his emotions very well yet. It’s time to teach him how. How do you teach him? You guessed it!! EMPATHY.

:ACTION: It doesn’t matter if your child is 1, 7, 15, or 35, when he is upset, he needs understanding and empathy. The lessons can come later, but during the time of extreme upset, he needs you to be the rock.

Brain development requires little ones to be soothed by someone else, and from that they develop the neural network to soothe themselves. If they don’t develop this neural network in infancy, whether because they are left to cry or for some other reason, they will need your help to develop it during childhood. -Dr. Laura Markham

The drill is the same. Let him know that you see that he is upset and that you’re there for him.

For more on tantrums in older children, read this post by Dr. Laura Markham, which explains in depth how to handle this issue.

Once the storm has passed and your child is calm, address the behaviors of kicking, hitting, slamming doors, or throwing things. Explain that the feelings are acceptable but these actions are not because they could cause injury. Talk about better ways of handling anger and frustration with your child; counting to 10, going outside to throw a ball, or for younger children, clapping releases that energy, or perhaps an optional cool down spot filled with books or soothing music. Punishing him for kicking won’t teach him a more appropriate way to handle his frustration, but only add to his bad feelings. Until we give children better tools to deal with tough emotions, we can’t expect them to do better.

SUMMARY
Permissive parents give in to tantrums by giving the child ice cream or buying the scooter, authoritarian parents may punish the child for having a tantrum, but positive parents stay within their set boundaries while empathizing and helping the child deal with her emotions.

It is also important to realize that being loving and present through a tantrum doesn’t teach your child it’s okay to have tantrums. Tantrums are a result of built up emotions that need released. Think of a time when you’ve been extremely upset. Perhaps your spouse or a friend was there with you while you cried or ranted, holding you, squeezing your hand, listening. It didn’t send the message to you that it’s good to be upset and rant, and it didn’t cause you to rant more frequently. When someone is present and comforting through our upsets, it helps us recover faster and makes us feel connected and loved.

We want to show our children that we accept them all the time, when the waters are calm AND through the raging storms. This is unconditional love.