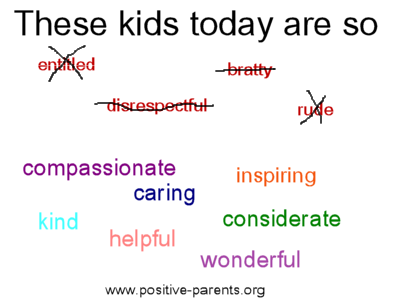 We hear it all the time! Kids today are bratty, entitled, and disrespectful.

I want to debunk this common myth about today’s youth. Sure, there are a few disrespectful, bratty, and entitled kids out there, but a great many of them are wonderful! I’ve had stories pour in from all across the globe and I want to share with you today just a few of the inspiring and beautiful hearts of “these kids today.”

Ok, this story took place when June was 5.  I was at the park with all 4 of the kids.  I was with the little three in a sand pit, a bit away from the playground structures.  I glanced over to see June come down a swirly slide and then turn around and face the slide again.  I watched as a young one-year-old came down after him.  His mom looked panicked a moment as she realized she was at the top of the structure and her baby was at the base of the slide.  Without hesitating, June gently lifted the little girl off the slide, turned around, and put her gently back on the ground.  I’m sure her mom was even more panicked, originally, when she saw a 5 year old pick up her child, but June knew exactly what to do to help the little girl down.   He was so gentle and kind and the mom thanked him when she finally got to the slide.   It was heartwarming to “catch” him being so caring and sweet.  He had no clue he was being watched.  He didn’t do it for recognition or praise.  He helped the little girl because he saw a need. That was one of the moments where it his you “I might just be doing something right.” –Susie C.

Last weekend while we were at an Easter Egg hunt, my 6 year old son did something wonderful.
We were sitting on a bench in the park opening all the eggs my son had found when another kid, maybe 4 years old, sat on the bench adjacent to us. He proceeded to look into his bag at the two lonely eggs inside and his bottom lip curled out like I’ve never seen before. He didn’t scream or wail, but he was obviously heartbroken. He tried to pull himself together to find his mom, but he took two steps away from the bench and his little legs just crumbled beneath his body, and that bottom lip made a second appearance. His poor face was just crushed.
Without hesitation, my son reached into his bag of eggs and started putting eggs into the other little guy’s bag. Soon another kid saw what my son was doing and came over with some of his eggs to share with the little boy too. Before we knew what was even happening, several kids at the park were coming to offer eggs to the little boy who had only found two. His eyes dried up, and that bottom lip turned into a smile. His mom reminded him to say thank you and he bounded away with a bag full of eggs.
To say that I am proud of my son is an understatement. I’ve shared this story with all his grandparents, aunts, and uncles, and my son beams with pride every time I share it. I am just so proud of the compassionate person he is becoming. – Jill

About a year ago my girls and I were walking from to a nearby park to play. As we walked, we passed our neighborhood K through eighth grade elementary school. It was around 3 pm, so the school was letting kids out for the end of the day. As we continued and got closer to the park, a group of older students were all huddled around a younger student. My oldest, Charlee, was five at the time. She is a very outgoing, friendly, caring and tender soul. She is also not one to shy away from a party. So she ran ahead of me and approached the crowd (still well within my sight and ear). As she approached the kids, one of the older boys pushed the younger boy down to the ground. I saw her immediately kneel on the ground next to him and ask if he was ok. Then I over heard her scold the older kids. When I approached them, the entire crowd was apologetic and giggling at the fact that she told them, “To treat others kindly and that God does not want them to hurt others”. Here was this little five year old preschooler standing up to sixth, seventh and eighth graders. I was so proud of her. -Lindsey

My son is 7 years old and is currently a second grader in the Maumee area.  For the last two years we have held an event called Conner’s Giving, where we collected goods/items to deliver around the holiday times.  The first event he made his own flyers and we made a Facebook page to advertise to everyone.  We ended up collecting so much food, paper/cleaning products, money etc that we were able to donate to The Beach House in Toledo and Mom’s House in Toledo as well.  Each time we received something we would take his picture and post it to FB to keep the momentum going.  This last year we collected for The Humane Society.  He wanted to help those in need.  Channel 13 News even did a story on him!  He has also volunteered the last two years for the Glass City Marathon at a water stop with the Agility Angels, and last year for the Race For Hope at North Cape Yacht club to help end Cancer.  He helped with preparing food and setting up tables.  – Jodi G 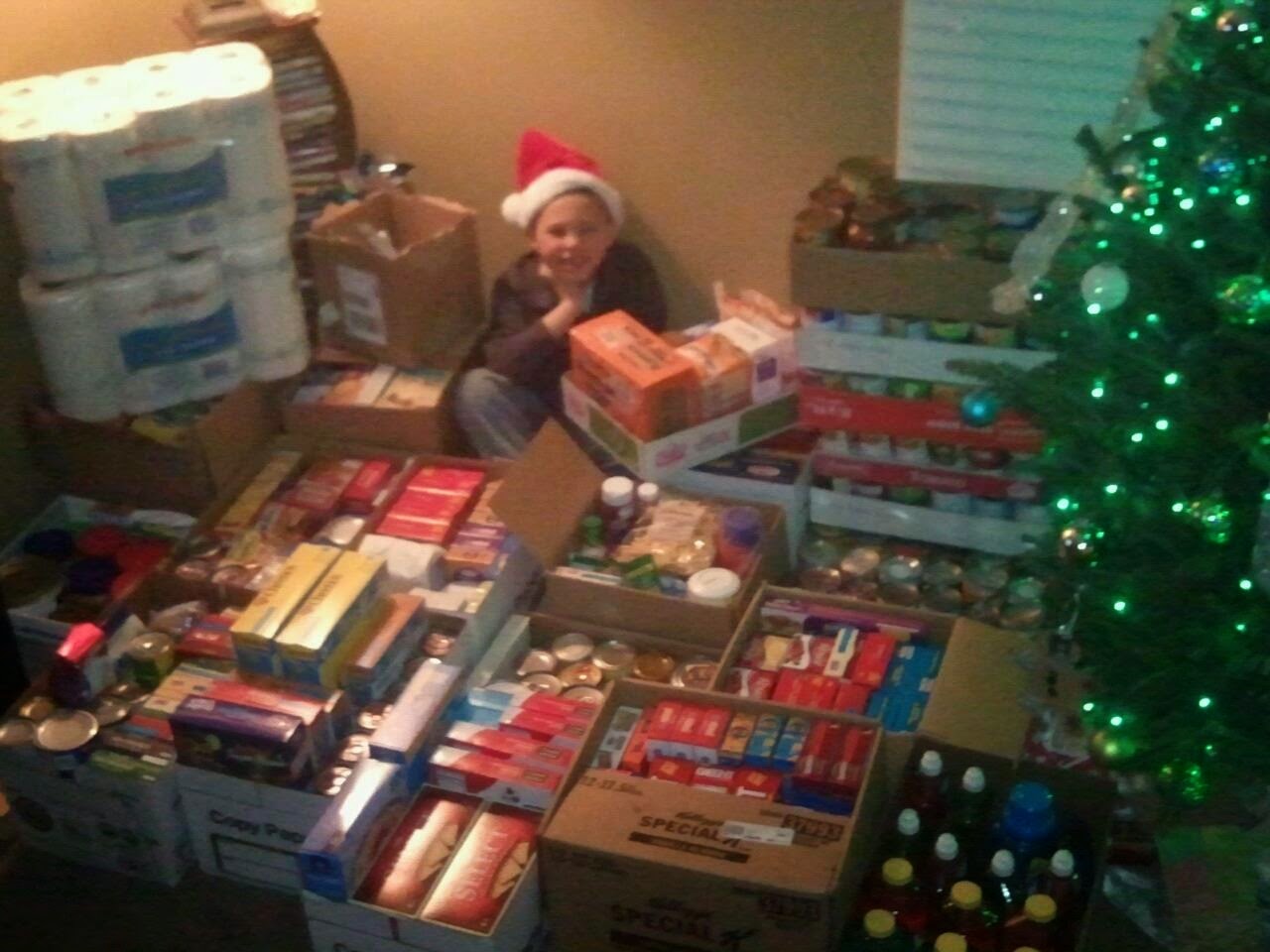 One of the reasons positive parenting is so important to me is that I want my kids to be considerate and thoughtful of the feelings of others, as I think the world is really lacking in considerate adults. My son, 5, can really struggle with behavior. We started out using punitive discipline and I think his behavior relects some of those past hurts. But he is also a kid who really thinks about others. A few months ago we were coming in from the car. I had his two younger siblings so and was frustrated that he was taking so long. I was about to shout to him to hurry him up when he turned the corner carrying a bag I needed carried in. I hadn’t asked him to bring it in, so I asked why he had it. He said “Because I knew it would help you out and I like to see you happy”. When positive parenting gets hard I like to think about this story and remind myself that positive parenting is about nurturing character, not controlling behavior. –Brandy

My 5 yo son made up Easter baskets for his teenage cousins. He picked out their favorite candies from his own stash. It was all his idea, he was so excited to play Easter bunny after he learned which candy they loved. We point out how sharing often gives other people joy and fun but we don’t “force” sharing. All the sweeter when they genuinely do. His cousins thought it was the coolest thing ever.- Alyssa C

My son is involved in our local youth theatre and is the youngest one. I have been blown away by how wonderful this entire group of kids are (there are over 100 of them!), from some of the elementary kids who have taken him under their wings, to the teenagers who make sure to always say hi, give high fives and hugs, want to take photos with him, etc. And I’ve been so impressed how much the older kids always encourage the younger ones, and help anyone who needs help with anything. Most of the “kids these days” are pretty darn awesome! – Shannon O

Just wanted to say my now 19yr old daughter is an incredible help to me and our family. While most teens get a bad rep these days about being selfish and self absorbed I’ve been so blessed to have a teenager that spends about 1/4- 1/2 her week taking care of her 2 younger siblings (12 and 14yr difference) so that her step dad and I can work and they don’t have to be in daycare. She picks them up from school walks them home – takes them to the park – out for hot chocolate and home for dinner – many nights she has done bath and bedtime too – she has been an integral support for out family and her brother and sister are so much better off having been in her care 🙂

She leaves for school in the fall and while we are so happy to see her off on this new adventure will miss her dearly but she has created a bond with them that will stay strong for a lifetime. – Sam

Last week, we were at our cooperative and one of the parents came up to me and said they needed to tell me what happened in one of my daughter’s classes. She proceeded to set the scene by saying that one of the little boys in her class (they are all between 4 and 6) had a really hard time with some happenings in the class and he needed to be escorted outside with his mom to calm him down. When the two returned, my daughter spoke to him and said, “We all know how you feel. It’s hard when you don’t get your way and sometimes it makes you really frustrated! And it’s also hard that your mom is teaching the class and she can’t give you all the attention you need because she has to give it to the rest of us! I’m so sorry you’re having such a hard time.” Of course, she is just repeating what she sees me doing with our toddler at home, but the other teachers thought it was super cool. I was so happy for her that she picked up on his pain and was able to empathize with him. I don’t know if these are the kinds of stories you’re looking for, but I thought I’d share. – Kelli H.

Heard of Zach Bonner? This teen has undertaken projects to help others since he was seven years old. Now a movie is being made about his inspiring life. ‘Realize that you have incredible power as an individual,’ he advises. ‘You really can change the world.’ Read his inspiring story here.