I’ll Give You an Example 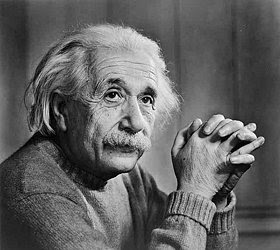 “Setting an example is not the main means of influencing another, it is the only means.” – Albert Einstein

“A good example has twice the value of good advice.” – Anonymous

“Every father should remember that one day his son will follow his example instead of his advice.” – Anonymous

“Juvenile delinquency would disappear if kids followed their parent’s advice instead of their example.” – Anonymous

“Nothing is so contagious as example; and we never do any great good or evil which does not produce its like.” – Francois de la Rochefoucauld

“Example is the school of mankind, and they will learn at no other.” – Edmund Burke

“Your children will become what you are; so be what you want them to be.” – David Bly

“Your children will see what you’re all about by what you live rather than what you say.” – Wayne Dyer

“Children are natural mimics who act like their parents despite every effort to teach them good manners.” – Anonymous

The reason so many parents struggle with “problem behaviors” has little to do with “discipline” and a whole lot to do with their example.

We teach them the unwanted behavior through our example, and then we have to try and clean it up with our “discipline.”

Here’s the thing. The reason so many wonderful positive parenting sites focus on teaching parents how to manage their own behavior, how to calm down in a storm, how to show compassion rather than anger, how to respond rather than react, is because they know that the example WE set is going to go farther in teaching our children proper behavior than any discipline technique, tool, or program we will ever learn.

But here’s the other thing. It’s HARD. Simple, but HARD. Because most of us weren’t taught good emotional intelligence when we were kids. Our brains are wired to react, to yell, to lash out, and to turn this around so that we can truly BE who we want our kids to BE, that means we have rewire our own brains. How? By consistently taking those deep breaths to calm yourself before you speak, consistently walking away when you’re too angry, consistently responding with sensitivity and compassion. Consistently. Time after time after time until the new pathway is made and it becomes our automatic response.

If we can consistently set the example of regulating our emotions, of calming before we speak, of speaking with kindness and consideration, of responding with compassion, we can bypass that whole “correcting in them our bad example” mess.

But wait. Am I saying we have to be perfect? Surely we are allowed to get upset from time to time. It’s human, right? Right. I’m not saying we have to perfect at all. To err is human. We don’t have to be perfect, but neither do they. Let’s not hold them up to a higher standard than we can attain ourselves. Let’s not be so quick to reprimand them when they yell or stomp away. Let’s allow them to be human, too.

Let’s focus more on our connection and on the example we’re setting, and the need for correction will lessen.  I wish you all a connected, playful day. <3