HomeparentingCuts, Scrapes, and Owies…A Recipe for a...
24 July 2011 Rebecca 27 Comments 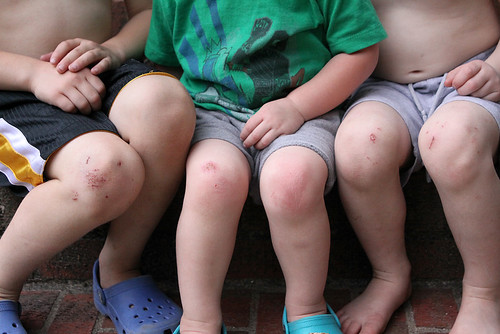 Recently I went to the park with my sister-in-laws, their children, my own, and had a picnic. We set up not far from the play equipment so we could watch the children play and still enjoy a bit of catching up. About an hour after we finished eating I was watching my 17-month-old attempt to walk across a rope bridge.

Now I knew she wasn’t actually going to do it, she was clearly testing her limitations. She kept climbing up and down the stairs wondering if she could do it. She watched other children run across it so she knew it could be done, yet she hadn’t attempted it. If she had worked up the courage to walk across she may have fallen. But then again she may not have. There would have been no difference to my reaction. And that was to sit back and let her go.

As I watched I saw her little leg slide onto the rope and she stepped out. I saw in her body language her brain working out the movements and deciding if she was capable doing this.

Suddenly out of nowhere two mothers swept down, concern filtering into their reactions as they helped my daughter off the rope. I groaned. They then went about trying to find me, disgust in their eyes because I hadn’t stopped her from doing something potentially dangerous.

They walked away shaking their heads, and I watched them shaking mine. Despite their good intentions they have actually caused more harm than good. They made my daughter second guess herself. They made her fear her own ability.

I get up, hoping to salvage something of her dwindling confidence, and lead her back to the rope bridge. Low and behold she doesn’t want a bar of it…fear and uncertainty lacing her little body. I don’t push her, but lead her elsewhere wishing parents would just stick to parenting their own children.

Me? I watch my children like a hawk, but I watch them. Not just what they’re doing but what they’re learning. To me, children need to hurt themselves. They need to fall down and scrape knees and break bones. They learn so much from it. They not only learn how to fall, but how to pick themselves up, how to cope with the pain, how to ask for help, how to treat themselves, how far to push themselves. They learn their physical boundaries and learn if they can push them.

This ability is becoming rarer in our day and age. Children and adults are becoming more fearful and anxious. They refuse to step out of their comfort zone for fear of what exactly? It doesn’t matter really, but they learnt it from a young age and just labeled it. Fear of the unknown, fear of being different, fear of being hurt.

I struggle so hard trying to explain this in a way that doesn’t make me out to be a possible loon, and found the following story helped parents begin to understand:

Imagine you’re three again. You’ve just moved into a new house, and there is an awesome tree in your back yard. You walk over to it running your hands over the rough bark and look up into the leaves. It goes quiet high and as you’re watching the light filter through the leaves, your eyes land on a branch that is pretty low. Actually it looks…enticing.

You place your hands on the limb and give a little jump, instinctively testing to see if it will hold your weight. It bows gently but holds strong. Before the thought even ghosts into your mind, you find your body hoisting itself up onto the branch. You steady yourself against the trunk, wobbling slightly. You look up and grin, amazed at what you’ve achieved and then your mind begins to think of the possibilities. Maybe go higher? What would you see? You could see onto the roof…that would be cool!

And so you start moving through the branches ever higher. You don’t realize it but your body is learning new abilities. It’s learning how to counter you equilibrium so you stay balanced, how to distinguish the branches that will be best to climb, how to flex your hands and grip properly with your fingertips.

Then you hear the back door open and your mother yelling your name. You answer and smiling with pride, bursting with your achievements watch as her eyes find yours. But she’s not happy. In fact she’s down right petrified. Her face is screwed up in fear and for the first time you feel it as well. Her body is tense and so your body becomes tense. And then she says the worst thing.

“Oh my god, get down, you could fall and hurt yourself!”

What? You could fall? You could get hurt? This hadn’t even occurred to you. But now you realize she’s right. You could fall and hurt yourself. And now your mind…filled with doubt starts to second guess what you just learnt and overrides your body. Your foot slips and you fall.

And so becomes the self- fulfilling prophecy.

Your mother runs to you, concerned but also a little angry. “See, I told you.” she clucks while attending to you. ‘Yes,’ you think, ‘I should listen more.’

Over the years you do return to that tree and climb it many times. Yet you never quite reach the top and there is always that doubt, that fear that settles in the back of your mind and controls your decisions. You’ll find that as you enter adulthood you never really can decide immediately. You never really rely solely on your instincts and find that you’ll second guess yourself on pretty much everything. And even if you do something on impulse there is always a flash of guilt or fear that comes along with it. You may not even realize this…after all isn’t this exactly how humans are supposed to feel, how adults are supposed to act?

Do you see? Do you understand? Children believe they are invincible. This only changes when fear is introduced externally. If the mother had instead trusted her child’s innate self- preservation the child would have found great achievement in her own ability. The child would have learnt to trust herself, her instincts which have been honed over eons of evolution. That right there is so important to human development. Sure the child may have fallen…but that wouldn’t have dented the belief of invincibility. In fact it would have cemented it. A child free of fear, having fallen from the tree and hurt oneself has realized that they didn’t die but lived. Scars become trophies shown to fellow children with pride and looked upon with awe. Those children are the ones that strive forward purposely while others sit back and watch, wishing they had the courage.

Many mothers I talk to tell me that children can’t be trusted, that they are clumsy and need to be protected from themselves. But children aren’t born suicidal. Why would Mother Nature do that? In fact Mother Nature has provided them their instincts to protect them. It’s the well -meaning parents that undermine their child’s self- preservation skills and possibly place the child in self- inflicted danger.

Now just to be clear I’m not saying you should just allow your child freedom to do whatever they wish. I’m just saying that maybe try siting back a little and watching your little one at play…you’ll be surprised at what they can achieve 🙂