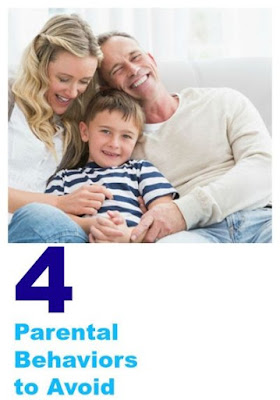 Dr. John Gottman is a world-renowned relationship expert. Through many years of research, he has discovered 4 behaviors that we should avoid if we want to have strong, healthy relationships. He calls these behaviors the four horsemen of the apocalypse because they are sure to bring about the end of a relationship. Having a healthy, connected relationship with our children is what enables us to influence and guide them throughout childhood; therefore, having knowledge and understanding of these 4 pitfalls and their antidotes can help you build a better relationship with those most precious to you – your children.

Horseman #1: Criticism
Parents often use criticism in an attempt to motivate a child to do better, but criticism rarely motivates. It tears down. Criticism is pointing out something negative – basically shining a spotlight on the child’s flaws and negative traits. The problem is that, according to Dr. Julie Gottman, “kids take in all that criticism as a way of reflecting who they are.” It makes children believe that there is something wrong with them. I’ve said before that parents should be the people who see the best in our children and shine the spotlight on their good qualities. Children can’t see and live up to the best in themselves if we’re always pointing out the worst.

Examples of Criticism:
“You’re so clumsy.” “Why can’t you ever remember to make your bed? What is wrong with you?” “Look at this mess! You’re too lazy to clean your room.” “You’re spoiled rotten and don’t appreciate anything!”

What are kids really hearing in these phrases? Be more careful to not spill your drink? Please be responsible and make your bed? I’d like for you to tidy your room? I wish you were more appreciative? No. They’re hearing: You’re clumsy. You’re stupid. You’re lazy. You’re spoiled. Any motivation to do better is squashed under the weight of shame.

The Fix:
Leave out character judgments and use “I statements” to state what you want. “Oops, it spilled. I want you to get a cloth and wipe it up.” “I want you to make your bed, please.” “I want you to clean your room before you go to your friend’s house.”

Horseman #2: Contempt
Contempt is criticism coming from a place of superiority. It comes out as name-calling, sneering, eye-rolling, sarcasm, hostile humor, and mockery. Interestingly, contempt not only predicted how relationships would go but it predicted how many infectious illnesses the listener would have in the coming year! I can only conclude from that information that talking down to a child tears down more than his self-esteem.

Examples of Contempt:
“Stupid brat!” “Are you ignorant? Why would you do that?” “You wouldn’t even think of picking up your clothes, would you?” “Aw, look at the little baby crying again! Wah wah!”

The Fix:
The antidote for contempt is respect. Treat your child with the same respect you want her to treat you with.

Horseman #3: Defensiveness
Defensiveness is described as a reaction against feeling personally attacked; self-protection through righteous indignation or playing the victim. In the parent-child relationship, the parent may feel defensive when he realizes he was actually in the wrong or when a child points out the parent’s flaws (criticizes the parent). Basically, defensiveness says “the problem is not me, it’s you.” It’s avoiding taking responsibility by placing blame on the child.

Examples of Defensiveness:
“I wouldn’t have yelled if you’d have done what you were told!” “I shouldn’t have called you stupid, BUT you made me so angry.”

The Fix:
Accept responsibility for your part in the problem, and listen to how your child is feeling with an attempt to truly understand her position. “I shouldn’t have called you stupid. I’m sorry.” “I apologize for yelling. I lost my temper.” ...continue reading at CreativeChild